Sdr Oon and I went to Berapit New Village to highlight an abandoned police station. Back in 2008, I have already brought this up with the former OCPD (head of district police) Dr. Md. Shah, and although he promised to look into it, nothing was done. The police station was infested with bushes and undergrowth and there were even old cars in the compound. Locals were afraid that the area will be a nest for vagabonds and drug addicts.

About a week after the below news report, the current OCPD Azman b. Lah led a team of officers and with the help of MPSP cleared up the area. 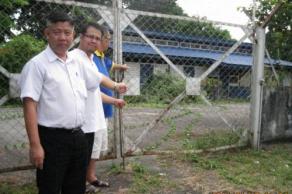