The horse’s mouth has spoken, literally. 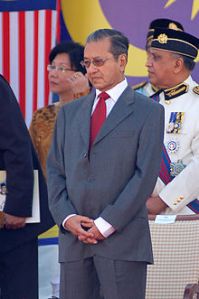 老马 (Lǎo Mǎ, chinese for Old Horse, Mǎ being the first word of the chinese transliteration of Tun Dr. Mahathir’s name) responding to DAP Lim Kit Siang’s call to investigate the lost of country’s funds amounting to RM100 billion during his 22-year reign as Prime Minister did the unexpected. He impeached his former colleagues in Barisan Nasional and their families!

He said, and I quote from Malaysiakini, “[Investigate] Not only me… all the Tuns should be audited [as well]. And their sons and grandsons too”.

Did Tun Dr. Mahathir the former Prime Minister just impeached all the top Barisan Nasional politicians in one swipe? Should such statement from an elder politician and former Prime Minister be taken seriously by the Malaysian Anti Corruption Commission? This is no laughing matter when a man of Mahathir’s stature publicly called for high level senior politicians to be investigated. Especially if we know at least one Tun who was a senior member of Mahathir’s cabinet is now being charged for a multi-billion ringgit scandal involving the Port Klang Free Zone.

www.about.me/stevensim
View all posts by stevensim »
« Manufacturing fear – UMNO, the party that failed to progress
My First Home Scheme: Bad idea from the start »