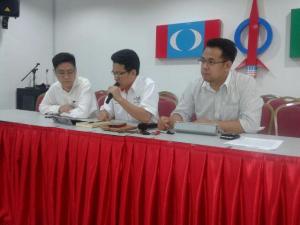 What happened in the last few days, beginning with Najib’s labeling of UMNO’s lackadaisical performance in GE13 as “Chinese tsunami”, then Utusan’s frontpage headline “Apa lagi Cina mau” and finally Mahathir’s remark on Chinese rejecting the “Malays’ hands of friendship”, are clearly acts of desperation on the part of UMNO.
Firstly, UMNO resorted to extreme racial rhetoric to justify the wanning support towards the party. The UMNO-led Barisan Nasional (BN) only received 47.38% of the popular votes compared to 50.87% by Pakatan Rakyat (PR). Overall BN’s performance also declined with further lost of 7 seats in the Parliament as well as a total of 71 seats in the state assemblies. The racial rhetoric is clearly a smokescreen to cover up UMNO-BN’s failure.
Secondly, this is also a sign of Najib unmasking his moderate image to reveal the more radical right-winged communalist image of his UMNO Youth days. This can only be explained by the intense pressure he is facing as he emerged from one of the biggest electoral defeats by UMNO and is now heading towards the party’s Annual General Assembly. This revealed Najib’s true colours. When he can no longer depend on Perkasa to uphold UMNO’s racist ideology, Najib himself resume Perkasa’s role. Najib is desperately trying to salvage his image especially with UMNO hardliners in order to retain his position as party chief and therefore Prime Minister, given that Muhyiddin-Muhkriz camp is almost certain to challenge it.
Finally, I would like to point out an interesting analysis by Dr. Hsu Dar Ren, former Gerakan central committee member published in the Malaysian Insider; Hsu opined that mathematically, it could not have been a “Chinese tsunami”. From his analysis, even if 90% of the Chinese voters who came out to vote supported Pakatan Rakyat (PR), Chinese votes only comprised about 50% of the total votes received by PR. A more probable 80% Chinese support would mean PR’s Chinese votes are only 45% of its total votes. In other words, more than half PR’s votes came from non-Chinese.
Pakatan Rakyat clearly won on the support of Malaysians of all races, tired of BN’s corruption and other abuses. At this time, when Malaysians are dejected by the results of GE13 due to alleged malpractices, Najib should play the role of a leader to ensure reconciliation not incite racial sentiments as smokescreen to cover up BN’s embarrassing performance.
Steven Sim Chee Keong
Member of Parliament for Bukit Mertajam
DAPSY National Political Education Director