In a democracy, we always say that the people are the boss.

But if the people are the boss, what is the most important power they should have?

We can talk about equality, justice, human rights – don’t get me wrong, all these are very very important – but when it comes to money, if the boss has no say, then he or she is not the real boss after all.

Somewhere in December last year, at a forum on the state and national budget organised by my colleague Lee Khai Loon, the state assemblyman for Machang Bubok, I threw out a challenge which Khai Loon and I eventually picked up ourselves: At which point can the people intervene in the government budget cycle?

We are definitely not in the state of normalcy

There are many things to fix in our democracy. We are definitely not normal.

We cannot even achieve the most basic thing in modern democracy, i.e. choosing our government. Today we have a federal government of only 48% popularity.

We do not get to elect for our local government. How serious is that, you may ask, it’s just the city council.

Well, the city council of Kuala Lumpur has an annual budget which averages about RM2 billion, making it bigger than the budget of every state governments in Malaysia save for four: Selangor, Terengganu, Sabah and Sarawak. The decision makers of the city council are not elected, hence they do not answer directly to the people.

Those are our money. If we are the boss, then we should have a say in how they are being spent.

To be fair, MPSP since 2012 had organised annual budget dialogue where members of the civil society; residents associations, rukun tetangga, Village/Community Development and Welfare Committees (JKKK), were invited to give their opinions on budgetary matters. There were also budget survey forms which were distributed all over the municipality to receive feedback from the ground on what the people want in the next budget.

In 2014, #BetterPenang, a non-governmental movement aimed at promoting how we can make our cities and towns better, worked with MPSP local councillor David Marshel to come out with an innovative way to gather public opinion on priorities when it comes to spending municipal monies. The project, called Projek ARM (Apa Rakyat Mahu) is a one-question survey compared to the 80-questions and subquestions official MPSP survey. Mobilising volunteers from JKKKs, and using a specially designed smartphone app, Projek ARM respondents were asked, “If you have RM250 next year, how much would you spend on the following items: 1) Cleanliness, 2) Infrastructure, 3) Drainage and flood control, 4) Parks and landscape, 5) Community activities, 6) Enforcement, 7) Strays and disease control.

That way, the complicated and often tedious budgetary discourse was made simple. We received feedbacks from 1,500 respondents and managed to produce a very informative report from the data which came back to us. It certainly helped local councillors to form a clearer picture of the people’s actual priorities when it comes to spending money on municipal services.

Our Money, Our Say

So, back to the budget forum in December last year. 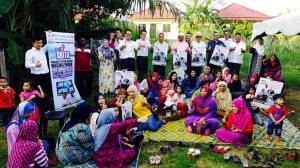 As mentioned earlier, both Khai Loon and I decided to take up the challenge which I posed at the forum – letting the people play an active part in deciding on government spending.

Thus, this year, both of us allocated RM50,000 each from our constituency fund – that’s a quarter of my total fund – to a participatory budgeting experiment: “Our Money, Our Say”. In short, through this project, we are allowing the people of Machang Bubok in Bukit Mertajam to vote on how the RM100,000 will be spent. Not some imaginary abstract social science or political science stuff – this is real money, real power.

How does it work?

This project is a one-year four-phase programme, each phase being: 1) demographic survey, 2) focus group discussion,3) voting, 4) planning and implementation. The title of each phase should be self-explanatory.

The implementing units are the 17 JKKKs in the constituency of Machang Bubok. Coordinating agencies include the Penang Women’s Development Corporation (PWDC), MPSP, the Central Seberang Perai District and Land Office, and both the MP and state assemblyman’s offices.

Phase One was launched in July 2015 and is now nearing completion. Members of the 17 JKKKs were given training in survey methods and even an introductory session on how to use the statistical analysis software, SPSS. In the process of doing participatory budgeting, we are also building the capacity of our grassroot leaders so that now they too take part in formulating government policy and not just dealing with municipal complaints only as they are accustomed to previously.

Although now merely at an experimental stage, it is still a very much large scale and ambitious project. We are talking about allowing the 30,000-odd voters of Machang Bubok to literally vote on how they want their tax money to be spent.

It goes without saying such project comes with many challenges. From training our JKKKs to conduct demographic surveys to organising and facilitating focus group discussions, to sending the message out so that enough people are aware of the project and will take part, from dealing with grouses about the copious work needed to be done to accomplish the year long project to angry residents telling us in our face: “hey we voted for you, why should you now kick the ball back to us (to make decisions)?”.

This is a new thing; acceptance of every stakeholders is not given.

Over the past three years since 2012, we have consulted experts and practitioners from the academia both local and overseas, from countries such as Brazil, Germany, India, Philippines, USA, from the United Nations even. But we have no choice. We have to learn as we go, all of us who are involved in this project – there is absolutely no precedence of any kind in Malaysia other than the smaller scale participatory budgeting projects PWDC has done in Penang since 2012.

Because it is no longer enough to just tweak the system and go about business as usual. We need to change the equation. Imagine the effect on our democracy when the people begin to realise that they can and should decide on how tax money is being spent. Imagine the effect on governance. Imagine if, for a start, the local council in Bukit Mertajam, which spends about RM200 million a year, decides to adopt the idea even partially and allows the people to vote for just 5% of its annual budget. That would be RM10 million in our hands.

Now imagine if the notorious figure RM2.6 billion, a mere 1% of the federal budget, was given to such participatory process. The people effectively become the boss.

Steven Sim Chee Keong is the MP for Bukit Mertajam. He also sits on the board of PWDC.